"Making movement not about something but as something"

Eshkol-Wachman Movement Notation was created in 1950 by the Israeli dancer and choreographer Noa Eshkol in cooperation with the architect Avraham Wachman. EWMN was first conceived as a system for defining and symbolizing the movement of the human body and its organization. It would not only allow for the analysis and documentation of movement but also its creation: Noah Eshkol developed around 50 different dance compositions.

The system is the result of an analytical process, which disassembles the phenomenon – body, space and time – into basic units. Within EWMN the human body is regarded as a system of straight rods (limbs) connected to one another by joints. From a movement of a single limb to the joint which is connected, the system grows in complexity when connecting the movements of different parts of the body with the whole movement in space (system of spatial reference).

EWMN is a framework that allows movement to be generated and processed by means of possible states or “transitions”, providing reference points rather than documenting static positions of movement.

To complete the writing of a movement two further “quantitative data” are required: one is the amount of movement (measured as a fraction or multiple of a circle) and the other is the time, or duration of movement.

EWMN is built of conventional signs which form an abstract model based on the universal language of geometry and mathematics as well as an algorithmic codex for the generation of movement of every possible kind.

Eshkol’s notion of movement and its approach to notation were not indebted to a particular style of dance, and most importantly were not limited to human movement. 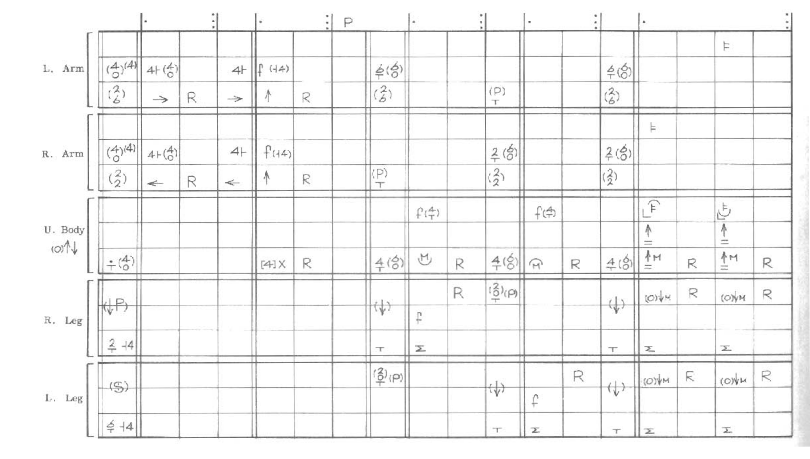 The combinations of these symbols allow the writing of every visually discernible movement of the body/(ies), and therefore, the documentation of different disciplines in the world of movement. This includes all styles of dance, folk dance, physical educations, martial arts, movement-based therapeutic systems, human and animal behaviour, the languages of the deaf and computer- graphic applications.

In 1960’s/70’s Heinz von Foerster - the creator of the second order cybernetics and director of the Biological Computer Laboratory at the University Of Illinois, invited Eshkol-Wachman with a group of dancers to work on a project sponsored by the US Army Research Office, in Durham. During this time, Foerster and Eshkol-Wachman together with the visual artist John Harries experimented and use EWMN as a tool to formalise and prescribe the quasi-automatic generation of visual patterns in video and computer animation.

Von Foerster's interest in EWMN arose from cybernetics: "the study of control and communication in the animal and the machine". More precisely, his interest arose from the re-conception of this science within the limits of complexity and unpredictability that are central to second order cybernetics. Cybernetics comprehends the world as a system of data processing independent from human beings, which enabled von Foerster to use and extend the notation as a control unit for the movement of autonomous robots.

Within this frame, EWMN can be regarded as an important contribution to the reorientation of relationships between human being and technology that started with the inception and implementation of computer robots and systems engineering during the 1960’s.

studies for a choreographic machine:

My approach is to consider the concept and practice of EWMN as a referential point for new experiments with programming tools both for representing and generating choreographic thought processes: evoking bodies, texts and situations. Aiming at bringing awareness towards technological layers, with all of its properties, designed intentions, ideologies, limitations — and ultimately bringing into shared consciousness the physicality of code; and the corporeality of the machine.

EWMN became a relevant reference for the coexistence and interplay of human beings and technology in the digital culture; following principles of cooperation, transformation and assemblage. It embraced the mediasphere as networks of actors with equal rights, consisting of (non-/)human and technological things in media environments. In this way it surpasses previous performative conceptions, opening up to self-reflexive and self-organized compositions via the notation, also to technological entities and to the unpredictability of their actions and networking.

Noa Eshkol: I Look at the Moon and Think about My Daughter-in-Law, a joint solo exhibition at Vleeshal and Kunstverein;
Noa Eshkol website;
Eshkol-Wachman wiki;
The Noa Eshkol Chamber Dance Group;

Joana Chicau is a media designer, with a background in performance - classical and contemporary dance. In her practice she investigates the possible connections between – and coexistence of – choreography and media design, aiming to open the possibilities for new aesthetic, energetic and social dimensions in design production processes. Choreographing design/ designing choreographies is a research and a project-based work and demonstrates her pursuit in forming a new hybrid methodology/system. There are two components involved: media design, which uses graphic elements and codes to communicate; and choreography, driven by principles of movement and body awareness. This project has been evolving into different formats: starting with a series of live performances to workshop series; and investigations on diverse choreographic genres from post-modern dance to tango. The ‘choreographic code’ has thus been presented in various contexts, opening the dialogue between the field of media design, art and dance cultures, and exploring the relationship between notation and physical enactment — and the understanding that language is also corporeal.

Research/Project made possible with a financial contribution from CBK Rotterdam (Centre for Visual Arts Rotterdam).